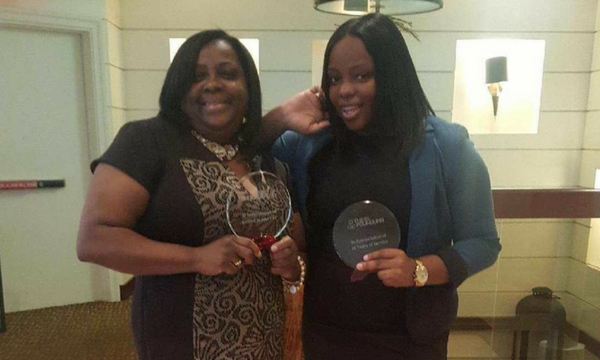 Above: Thelma and LaTonya at a Foundling employee recognition event.

Thelma, who has worked at The New York Foundling for 10 years, says giving back, helping others, and taking care of family has always filled her with so much joy.

Her passion for doing good makes The Foundling the perfect place for her – and not surprisingly, her selflessness rubbed off onto her daughter LaTonya, who followed in her footsteps and now works at The Foundling, too (she hit her 10-year mark in 2017, just like mom). Both started working as data entry specialists, and since have grown into new roles. Thelma is a member of The Foundling’s Quality, Performance and Compliance department as the Director of Data Quality and Administration, and LaTonya is a systems trainer with the IT Services department.

Recently, the family came together to do something remarkable for their community. Leading up to LaTonya’s birthday in December, she urged friends and family to collect and donate toys for kids in need. Right before Christmas, LaTonya hosted a toy giveaway in the Bronx in honor of her birthday and instead of collecting presents for herself.

The family gave out a total of 150 toys, and LaTonya’s brother played Santa for the kids. They had a big turnout of families from the neighborhood, nearby community shelters and from a nearby church. Aside from receiving gifts, there were games and other little treats for them, too.

With the help of her mother Thelma, News 12 The Bronx came out to the event — a surprise for LaTonya.

“I was nervous at first that people wouldn’t come,” says LaTonya, who said she had the idea to dedicate her birthday in this way for several years. After such a successful event, “we’re doing it again next year.”

Thelma, who is also a foster parent to a 3-year-old girl, has five children and several grandchildren. She says all of her children are “giving and thoughtful” people.