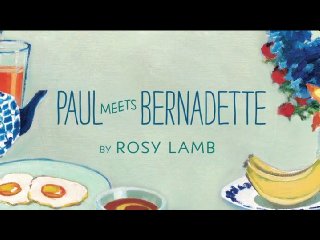 Many thanks to Foundling friend Celia McGee for the latest issue of our Foundling Family Book Reviews. The characters in this month’s selections are embarking on new adventures, and we hope you are too! Happy 2014!

Going around in circles is the sad opposite of moving forward, of making a fresh start. In Paul Meets Bernadette, author Rosy Lamb, whose non-writing life is as a painter and sculptor, takes this familiar phrase and runs with it. Or rather swims. Paul is a solitary goldfish who thinks he’s perfectly content swimming round and round in a goldfish bowl that, in Lamb’s painterly illustrations, appears as an orb drawn in the shape of the world Paul completely ignores. (The different directions his circles take are also a subtle way of instilling in young readers just how many permutations of movement there are.) But then Bernadette, a fetching young lady goldfish, “drops in” from above, and encourages Paul to look at the world outside the bowl. You could say, though, that the seemingly sophisticated Bernadette is really an innocent—with the transformative vision of an artist—at heart. She’ll crack youngsters up as she instructs Paul that two bananas on a plate are a boat, a vase of flowers a “forest with trees of every color,” or a teapot, an elephant, of course, feeding its young when pouring tea into dainty cups. By this time Paul is head over tail in love with Bernadette. She reciprocates, and they swim happily ever after.

It’s usually hard for young’uns to say good-by to their parents. But not for raccoon brothers Bingo and J’miah, as they excitedly part from Little Mama and Daddy-O. They’re proudly start their first jobs, as Official Sugar Man Swamp Scouts.  Appelt spins their epic in the best south Texas good-ole-boy, tall-tale-telling style. Yet she works in animal facts and Latin names, history and pre-history, and the skullduggery of greedy developers, a female alligator wrestler intent on turning the swamp into a theme park, and an evil-minded landowner aiming to kick young Chap Brayburn (he’s a human boy) and his mother out of their Paradise Pies Café. But there’s more trouble a-brewing in Blue Man Swamp, named after the gigantic, antediluvian, mostly sound- asleep creature who nonetheless rules the swamp, guarded by his trusty rattlesnake Gertrude—if he can be provoked to wake. Down from the north is sweeping a ravenous, destructive family of feral hogs, and only Blue Man can scare them away. Appelt, simultaneously hilarious and instructive, weaves her swamp-dweller thriller like a storyteller by a campfire or rocking slowly on the porch of the Paradise Pies Café. She has the knack of speaking directly, drawl and all, to the reader. (The swamp critters talk, too.) This should not take away from the sense of the downright mythical—the Blue Man is cousin, Appelt lets on, to “Bamanou, Sasquatch and Yeti.” Eat some of those Brayburn sweet sugar pies, and you’ll believe anything too.

Transformation can be physical or psychological, of the mind and of the heart. Having watched most of her family and village brutally slaughtered in front of her by the army of her country’s arch-enemy, Blevon, young Alexa Hollen cuts off her hair, changes her voice and her stride, and starts a new life as Alex, a boy. Already a consummate swordsman, she joins her twin brother, Marcel, in the Prince’s Guard. While Larson, another debut novelist, is a little wobbly with her story’s vaguely medieval setting—it also runs to sorcerers and magic—when it comes to mano a mano fighting, matters of loyalty and trust, and the stirrings of young, carnal love, she is, as she might say in one of her modern slippages, more than ok. This is a smartly, lushly plotted book, mixing Alex/Alexa’s bravery and brief but agonizing captivity, her passion for yet distrust of her nation’s crown prince, Damian of Antion (his father is a cruel king), and the opposing forces of pride and sacrifice into a boiling cauldron of warfare and desire. There is a saying, Prince Damian tells her at one point, that “it’s better for one man to die than a whole nation to suffer.” Only toward the end does Alexa think she knows what he means. Luckily she is outsmarting herself, and the unexpected is the novel’s conclusion.

Though published for grownups, this is a novel the young adult set can equally enjoy. The award-winning Nguyen, at once a longtime fan of Laura Ingalls Wilder’s pioneer life books and a sharp-eyed, tender chronicler of the immigrant experience (her family fled Vietnam in 1975), pulls off a novel that combines both.  Her main character, Lee Lien, a young Vietnamese- American struggling to finish her dissertation on Edith Wharton while unsuccessful at job-hunting and boyfriend complications, is forced into a fraught new life. She moves back in with her cold, widowed mother and sweet, aging grandfather. For years they have been moving from grim place to grim place running “Chinese buffet” restaurants throughout the mid-West, much like the Ingalls family and its perennial efforts to find a better life. But Lee is convinced she has an actual tie to Laura Ingalls Wilder, in the form of a gold pin engraved with a little house given to her grandfather at his Saigon café by an elderly American journalist named Rose during the Vietnam War. Since Wilder’s daughter’s name was also Rose, Lee impulsively sets out on a quest to find the truth about the pin—and more. She learns more about herself, her father’s death, the Ingalls family’s real and long history, and certainly that she’s more a Laura gal than an Edith. In Nguyen’s finely rendered novel, Lee is thrust into a detective story with very personal consequences. Just as her mother and grandfather learn to prosper from the new American taste for authentic ethnic cuisine, Lee gives Nguyen an unbelievably believable mystery not only to solve but to understand.