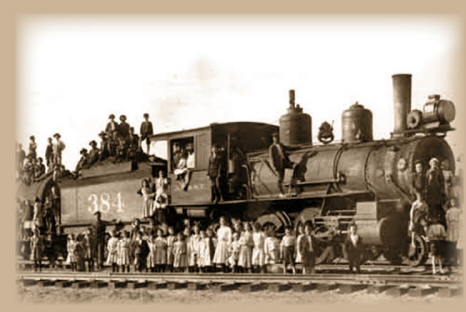 Note- For orphan train riders and their descendants:

Discover your orphan train rider’s journey through the collaborated efforts of rail historians across America. Contact the historians at orphantrainrail@outlook.com The itineraries are free, though a free will donation is accepted.

THE LITTLE TRAIN, by Lois Lenski – One of the most beloved and prolific of American children’s book authors, Lois Lenski produced a series in which her cheerful hero Mr. Small becomes an aviator, a sailor, a farmer, a fireman, a cowboy, a policeman, a father, and, yes, a train engineer. Through her simple story and lovable illustrations, Lenski, who wrote this book in 1940, still manages to give a very full and clear explanation of how trains work. (Ages 3-5)

THE LITTLE ENGINE THAT COULD, by Watty Piper – It’s not the 1930 publishing date that makes this book a classic, but its timeless message of hard work and optimism—and that the big and blustery don’t always finish first. With its colorful, playful pictures by Doris and George Hauman, the tale of the shy Little Blue Engine who commits to pulling a train filled with toys over a steep, high mountain to good girls and boys by puffing the indelible words “I think I can, I think I can” has endeared it to generations. (Ages 3-7)

THOMAS THE TANK ENGINE, by Wilbert Awdry, illustrated by C. Reginald Dalby  – The never-ending products and promotions flowing from a veritable Thomas the Tank Engine industry should not detract from the charming 1946 original and the book’s enduring popularity. Trains that behave badly are taught many lessons about how to change their naughty ways. Who can fail to fall in love with the antics of an impish choo-choo who does right in the end? (Ages 3-7)

THE LITTLE RED CABOOSE, by Marian Potter and Tibor Gergely – Small wonder that this sweet children’s book has been a top-selling Golden Book since its publication in 1953. A little caboose—red, or course—is sad that children waving at passing trains ignore him as he goes by. But he becomes a hero when his train starts slipping backward in a treacherous mountain tunnel and he saves it from plummeting downward by pushing back with all his might.  Then the children see that the smallest, last car on the train is the real star, and his readers will concede he deserves all the waves he could want. (Ages 3-7)

STEAM TRAIN, DREAM TRAIN, by Sherri Duskey Rinker, illustrated by Tom Lichtenfeld – Even if they aren’t acquainted with this duo’s #1 New York Times best seller Good Night, Good Night, Construction Site, this new bedtime title will win over youngsters instantly. After all, the idea of a dream train pulling into a station for freight is fanciful enough. But then comes the loading of the cars: the reefer car has polar bears filling it up with ice cream, it takes elephants to handle the tanker cars that carry paints, race cars count on tortoises to get them on board the auto racks, and kangaroos make like pogo sticks to land balls in the hopper car. Good night, sleep tight, and ride those rails of dreamland. (Ages 4-6)

THE POLAR EXPRESS, by Chris Van Allsburg – For the past three decades, Christmas wouldn’t be Christmas without this instant classic by a sculptor turned children’s book writer and illustrator. A young boy’s faith in Christmas is restored when a train called the Polar Express stops by and rockets him and other children to Santa’s North Pole. They party with the elves, marvel at the toys, and each is allowed to pick a gift. The sleigh bell the little boy selects disappears and then resurfaces, wrapped under the tree back home. But only children can hear it ring. Here are the famous last lines: “At one time, most of my friends could hear the bell, but as years passed, it fell silent for all of them…. Though I’ve grown old, the bell still rings for me, as it does for all who truly believe.” (Ages 4-8)

HOW TO TRAIN A TRAIN, by Jason Carter Eaton, illustrated by John Rocco – This inventive new book, with dynamo illustrations to match, imagines that kids can make pets out of trains—of which there are as many different kinds as there are kids—and, by applying kind, instructive and good-humored parenting skills can not only help the trains make new friends but meet a whole slew of buddies themselves.

THE CABOOSE WHO GOT LOOSE, by Bill Peet – A young friend of mine recently checked this book out of his school library and really enjoyed it. Bill Peet, the author, was also a sketch artist for Walt Disney, and worked on movies like “Fantasia,” “Peter Pan,” and “101 Dalmatians.” He brings that same whimsical verve to this popular story of Katy the Caboose, who complains that, stuck at her end of the train, she never gets to see beautiful landscapes. But one day she jolts loose, and after a perilous journey downhill lands between two trees, where she gazes out at nature’s beauty happily ever after. (Ages 5-8)

THE BOXCAR CHILDREN, by Gertrude Chandler Warner – When four young brothers and sisters are suddenly orphaned, a boxcar abandoned in a forest becomes their new home. This first of a series about the foursome was published in 1924. It’s by making a life for themselves in their unusual new habitat that they learn independence and self-reliance. They think they can’t count on the grandfather they’ve never met, who’s very rich but supposedly quite cruel.  Once they find one another, though, it’s a happy reunion, and the children fondly leave the boxcar behind.  (Ages 7 to 10)

FREEDOM TRAIN, by Evelyn Coleman – Inspired by the 1947-1949 tour of the actual Freedom Train (painted red, white and blue) that traveled the country to exhibit historical American artifacts and documents, this story takes place in Atlanta. Young Clyde Thomason, proud of having an older brother who’s guarding the train, which will only stop in cities where the onlookers are racially integrated, is not only being bullied in school but is nervous about having to recite the Freedom Pledge when the train arrives. During one more bully session, an African-American boy comes to Clyde’s aid, which proves just the start of Clyde’s journey toward understanding race relations, the lives of black people, and what the future may hold.  (Ages 8-12)

RIDERS ON THE ORPHAN TRAIN, by Alison Moore – With this novel about two Orphan Train children from very different places, Alison Moore tells the part of the trains’ history from 1918 until the Great Depression. Eleven-year-old Ezra Duval has been left in an orphanage by his widowed archaeologist father and Maud Farrell, 12, who has crossed the ocean from Ireland, meets a similar fate. They meet on an Orphan Train, and though their friendship is brief and they end up far away from one another, a bond persists, in part fueled by a mutual sense of abandonment, loneliness, and a yearning for a home.

THE ORPHAN TRAIN, by Christine Baker Kline – About to age out of the foster system, Molly Ayer, whose heritage is Penobscot Indian, just in time takes a job helping an elderly woman named Vivian clean out the house where she has lived so long. It turns out they have a surprising connectedness: as a young girl from Ireland Vivian ended up an Orphan Train rider, with secrets contained in some of the mementoes she is sorting through. Friendship and loss set the tone of this very moving book. (Ages 12 and up)

TRAIN WHISTLE GUITAR, by Albert Murray – The great African-American essayist and novelist Albert Murray passed away recently, but his legacy lives on in, among other writings,  his novel Train Whistle Guitar. Though the trains and their whistles passing through the small town in the segregated South where the protagonist, Scooter, is a child are largely symbolic, they sound throughout stories about what it means to grow up, leave a place, and remember it vividly and nostalgically as an adult, and how the Great Migration cast its power over America north and south.  (12 and up, and adult)

MY NOTORIOUS LIFE, by Kate Manning – The eldest of four close-knit, impoverished Irish immigrant children in the 1860s, Axie Muldoon’s life is torn apart when all four are placed on an Orphan Train and dropped off at different stations along the way. Though Axie makes it back to New York and rises to the heights of wealth and notoriety in Manhattan society, her life is haunted by the loss of her siblings and her devotion to finding and reuniting them once again. Based on a true story. (Ages 14 and up, and adult)

RISING FROM THE RAILS: Pullman Porters and the Making of the Black Middle Class, by Larry Tye – By virtue of income, social sophistication and subsequent high standing in the black community, the porters that railroad magnate George Pullman originally hired from among the ex-slaves and others of the Jim Crow south helped form the underpinnings of a black middle class. Working in the luxurious sleeping cars on the trains, however, they had to absorb how to be both subservient and dignified, serving as everything from waiters to concierges, doctors and nannies, and coming in contact with many celebrities of the era. By the 1920s Pullman was the country’s largest employer of blacks; the porters were the first to form an all-black union. As this book full of wonderful anecdotes explains, this had fruitful implications for the beginnings of the Civil Rights movement, its convictions, and its significance in American history. (Ages 14 and up, and adult)