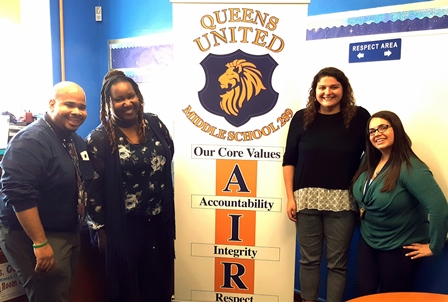 Thanks to her dedication to helping New York City children, Elizabeth Tremblay, a clinical supervisor at The New York Foundling, has been named Turnaround for Children’s Person of the Month for April 2017.

Tremblay was nominated by colleague Amanda Mays, manager of partnership development at Turnaround, who says Tremblay is, “a strong advocate for creating responsive and sustainable partnerships between New York Foundling and schools.”

Turnaround’s Person of the Month Campaign recognizes outstanding individuals in its Newark, New Jersey, New York City and Washington, D.C. school-based partnerships. According to the organization, it’s an opportunity to showcase the real faces – educators, school leaders, social workers and mental health partners – behind the work.

Tremblay spoke with Turnaround at length about her work in the field.

“If kids feel like they have someone that’s in their corner, that’s cheering them on, they’re saying they can do it – kids can amaze you,” she told Turnaround in an interview for their blog, The 180. “No matter what age, what demographic or where they live.”

Read Tremblay’s full interview with Turnaround for Children on their blog, The 180.

10 Reasons to Become a Foster Parent with The Foundling!
Scroll to top