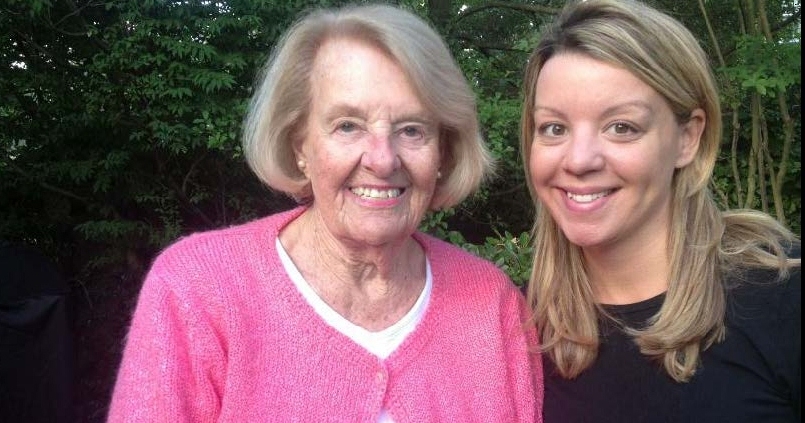 We are very lucky to have so many great stories here at The Foundling, from clients, children, alumni, Sisters, staff and volunteers alike. The conversation below is between Foundling Therapist, Heidi Lynch, and her grandmother, Connie Sullivan, who was a social worker for The Foundling in the 1940s. They are pictured in a recent shot above. Both are impressive woman who have used their careers to benefit others, enjoy!

H:  I am Heidi Lynch and I work for The Foundling currently as a therapist.

C: My name is Constance Heide Sullivan and I was born 1921, Heidi is my granddaughter. I grew up in New York City and now I live in Rumson, New Jersey. My family and I went to the shore in New Jersey when I was a child.

H: And your family?

C: I have 7 children, 16 grandchildren and 8 great grandchildren and I grew up in a large family as well with 2 brothers and 5 sisters. Interestingly, one of my brothers became a Trappist monk (he’s now 90), one became a priest and later a monsignor and one sister became a nun. My parents had 32 grandchildren!

H: Tell us about your how you came to work at The Foundling.

C: Well I went to Manhattanville College and graduated in 1942

The New York Foundling Hospital was my first job after graduation, and I worked as a social worker in the foster home division. My first territory was mostly Queens , Middle Village and that area. I was responsible for 60 children and checked in on them by visiting them once a month. After each visit I would write up a report about what I saw there.

I had to get to know foster parents and most of them were very nice on the whole and they were wonderful to the kids, I can’t remember having any very bad situations to fix.

There were 10 to 12 other women also working there (in my area for The New York Foundling) and it was like a continuation of college, we had a wonderful time together.

The Sisters of Charity ran everything in those days, and occasionally they would ask us social workers to come hold the babies at the hospital who didn’t get enough attention, that was very sad to see.

H: How did you decide to go into social work?

C: I knew I didn’t want a desk job, and would hate being cooped up in a moldy office all day! As a social worker, I spent most time out in the field, doing my visits. I loved the freedom of being out and about all the time, and if you can believe it, the subway was 5 cents  and the city buses were 10 cents, so it was easy to get around.

I decided on social work when I was just 10 or 12, because I hated seeing children in other neighborhoods who were unkempt and even then I just wanted to go clean them up and give them some love. My parents were supportive of this decision.

H: Were you in dangerous neighborhoods at all?

C: No, the places I worked primarily were not a bit scary; they were nice, middle class areas in Queens.

The only difficulty I had was in finding biological parents, tracking them down was sometimes hard. We tried to ensure that they had some interest in the child’s life, and organize visits for them.

Occasionally I had to work at night to find biological parents and that could be scary, as I would have only an address to go find, though it always turned out fine.

I remember one family had 5 children all in one foster home, they had a wonderful foster mother for a year or two who was willing to take all 5. I remember being very impressed with her.

H: It can be so hard now too, when you connect with a child to just go about your normal day. Did you feel like you had good support system at NYF?

C: Yes, we really did. Though we all had different territories (the women I worked with), we would meet for lunch or dinner maybe 3 times a week when we were in the office to write our reports, and had a great spirit of camaraderie.

H: I feel that it can be isolating when you’re in the field alone all the time, and it sounds like we have a similar day-to-day with most time spent in the field and only a small portion in the office. It’s very lucky to have such great co-workers.

H: Was there a time when you felt shocked by your work? Was it a hard adjustment? I know you had a very different background from those you worked with.

C: Yes, at first it was very traumatic, shocking and difficult to see how other people live and I had some emotional turmoil about the way I lived versus the way they lived.

There were lots of Irish children in foster care then, very different from the demographics today. Most foster families were lower to middle class parents, many with older children, and they felt it was lucrative to take in foster children.

H: Now the goal of foster care is to place children back in their biological homes as soon as possible, was this different? Were there more “institutions” or “orphanages”?

C: Yes, but most of these homes were outside of New York City even then.

H: 1942 you were working for The Foundling, correct?

wedding! I used cases from my time at NYF to write this dissertation.

H: Was it unusual for women to get a Master’s degree at this time?

C: I suppose it was yes, none of my sisters or friends had one, but I always thought it would be good in case I needed to work later in life or needed a career.

H: That was probably an unusual way of thinking back then as well.

C: Well yes, girls were expected to graduate from college maybe and then get married, but I always wanted something to fall back on, it was just part of who I was.

H: You were very close to a few of your family’s employees growing up? You learned to connect with people at a young age.

C: Yes, we have several cooks, nurses and “fraulines” who were German, and I would love to spend time with them to have coffee, I even picked up lots of German from them. I had a most exceptional childhood and they were a part of it.

H: Where do you think you learned to give back, or where did your sense that you wanted to help people come from?

C: My grandfather I think. He started the Heide Candy Company, where my father and his brothers worked, they were very successful. My grandfather had a great deal of money, but he put it to good use, he was one of the original men who supported Catholic Charities and the American Indian Missions. We learned the importance of charity from him.

C: I’m thrilled that Heidi works at The Foundling, I think she loves the work, and it’s a chance for me to “pass the baton” as it were.

H: It is like that! We have shared experiences, similarities in our day-to-day, and it’s a wonderful connection, even with this many years separating our time here. I didn’t even know until after my first interview at The Foundling that grandma worked there too.

H: Things, maybe not color of eyes, but other, more important things can be passed down to new generations. In this case, it’s our work.

Do you have a Foundling story you think should be shared with our community? Tell us about it! On social media, or email kathleen.biemer@nyfoundling.org and you could be our next guest blogger.