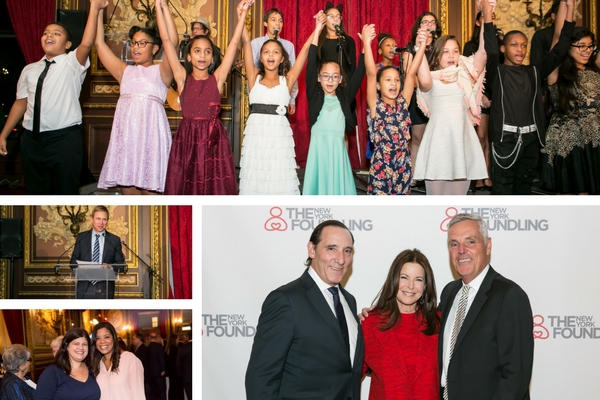 On November 1, nearly 300 people gathered at the Metropolitan Club to support The New York Foundling and to celebrate the 10th anniversary of Mott Haven Academy.

We recognized the 200th anniversary of the Sisters of Charity of New York, and celebrated honorees Ellen and Daniel Crown, who have been steadfast supporters of The Foundling over the years, and were advocates for Haven Academy from its inception.

Thanks to our sponsors, supporters and donors, this year’s Fall Fête brought in $862,000, all of which directly supports Foundling programs, including Haven Academy!

Pat Kiernan, popular news anchor on NY1, returned to M.C. the event for the second year, and the evening was kicked off with a stellar performance by Haven Kids Rock, a music program formed at Haven Academy. Guests watched an inspiring video about the school’s specialized curriculum and approach to working with kids, and heard from a parent who adopted children who now attend Haven.

The night concluded with an enormously successful live auction, run by auctioneer Robbie Gordy, which garnered donations for after-school programs, computers and uniforms for students, as well as for The Foundling’s still in-need Head Start programs damaged by the hurricane in Puerto Rico.

To see photos from the event, visit our Facebook album here.