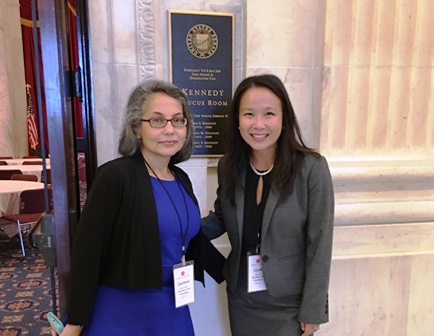 Senator Gillibrand recognized our extensive work to keep families together, prevent abuse and neglect, provide academic support for children, and give people with developmental disabilities the tools and training they need to lead stable, fulfilling and independent lives. We care for nearly 10 percent of New York City’s foster care population, and provide prevention services from our crisis nursery, to juvenile justice initiatives, to family therapy support.

“It was an honor to represent The New York Foundling during the Angels in Adoption Pin Ceremony. Families and individuals were recognized for their commitment to providing permanent families for children in the child welfare system. During our time in Washington, we were able to network and secure additional resources for the families we serve and support. This entire experience has been energizing, exciting and inspiring,” said Carmen Jirau-Rivera, Chief Program Officer at The New York Foundling

“It is an incredible honor to be nominated by Senator Gillibrand for the 2016 Angels in Adoption® award,” said Bill Baccaglini, President and CEO, The New York Foundling. “Over the last 147 years, The Foundling has developed a very deep understanding of the issues that surround foster care and adoption, and from our on-the-ground experience, we’ve crafted a thoughtful and evidence-based approach to how we can best support these children and families that is continuously being refined to meet their needs.”

The Angels in Adoption® Program is CCAI’s signature public awareness event and provides an opportunity for all members of the U.S. Congress to honor the good work of their constituents who have enriched the lives of foster children and orphans in the United States and abroad. This year, more than 140 “Angels” are being honored through the Angels in Adoption® Program.

“The Angels in Adoption® Program is a unique annual opportunity in the nation’s Capital to shine a well-deserved spotlight on the power of adoption and the unspoken heroes who have made the dream of a family a reality for children. Since the program’s inception, over 2,500 Angels have come to Washington to share their firsthand adoption experiences with Members of Congress, highlighting its joys, as well as the barriers encountered in the process,” said Becky Weichhand, Executive Director at CCAI.

Celebrate International Week of the Deaf!

The Foundling Announces Joint Partnership with The American Professional Society...
Scroll to top