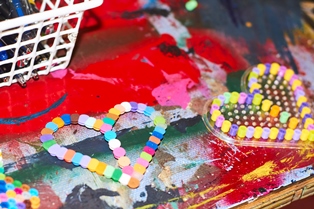 I feel grateful and fortunate to have been given the opportunity to work at Camp Felix, an overnight summer camp for children in New York City’s child foster care system. I was able to connect with the campers in a way that was fun and exciting but, more importantly, moving and inspiring!

Campers were always stopping by my Arts cabin, even when their cabin wasn’t officially on the schedule. Campers get to pick “electives” during the summer (this means they can pick any activity they want to do during the day) and my electives were always filled with kids- so much so that I had to open the door so that they could work on their projects on my cabin’s front lawn. They’d come early, stay late, stop by during their rest hour after dinner, and even ask to come by in lieu of other planned evening activities (especially ones that were loud and crowded because it helped calm their anxiety).  So, even during my “down time,” I frequently found myself doing art with a few campers but I did so willingly because I knew that our time together was already so limited. They’re also really cute, persuasive, and hard to resist.

The summer 2016 season of camp may be over, but I think about the memories that were created every day. I smile and light up when I think back at the conversations between the campers and I and feel really proud of the ways in which we were able to learn from each other. Some positive things I heard included:

“Today was the best day of my life.”

“I didn’t get any sleep last night because I was so excited to go to camp.”

“I actually had fun!” (from a very shy, first-time camper after the dance party)

“I wish you were my art teacher at school.”

There was a moment where the youngest girls’ cabin spontaneously broke out into conversation while drawing in which they shared a lot of details from their home life. It was pretty heartbreaking, but I took it as a sign that they felt comfortable enough in the space to share and speak freely. Since a main goal of mine was for them to express what was on their minds, it also warmed my heart. Later, one of the counselors told me that was the first time she had ever heard any of them talk about their home lives.

The Foundling’s Work Services Program for Individuals with Developmental...

Who Should I Include On My Adoption Team?
Scroll to top