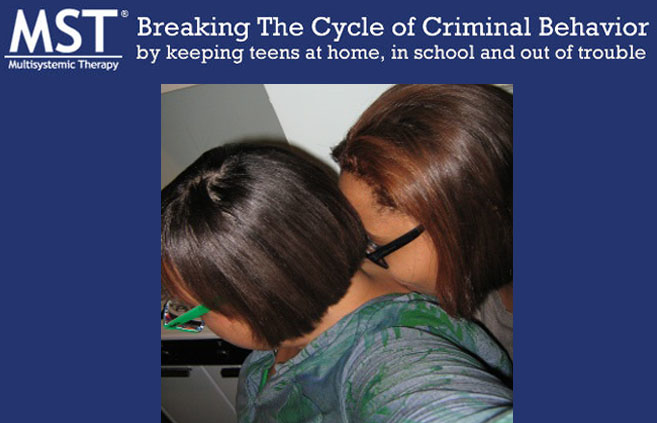 Crystal had reached the “What more can I do?” stage. Her 17-year-old daughter, Danielle, had been getting in trouble for years. It reached crisis overload when the girl disappeared over a Memorial Day weekend. Crystal was sure she had run away, but hesitated involving the police.

As time passed, the mother felt she had no choice and had a PINS (People In Need of Supervision) warrant issued on her daughter. This meant that if found, Danielle would be returned to New York City, where they lived, and brought before a judge.

Getting a warrant wasn’t a decision Crystal took lightly. She knew she ran the risk of losing her child to the juvenile-justice system. Danielle was found safe in Washington, D.C. And then things changed dramatically for mother and daughter. The New York City’s Administration for Children’s Services (ACS) had a mandate to keep kids out of the system and with their families whenever possible.

So instead of Danielle being carted away, the court recommended Multisystemic Therapy (MST) as her treatment plan. Crystal was “skeptical,” as she later put it. After all, she and Danielle had been seeing individual therapists for two years at great out-of-pocket expense with little evidence her daughter was improving. MST was different, Crystal was told. A therapist would be assigned to the case, she would work with them in their home—and it wouldn’t cost the family anything.

Crystal became further dubious when she heard that when Danielle wasn’t home, the therapist would spend time with the mother. “No way,” Crystal said. “This isn’t my problem. It’s my daughter’s.”

She began to change her stance after meeting Adriana, the MST therapist. Crystal and Adriana got together a couple of times without Danielle to develop a treatment game plan. Each adolescent is different, and cookie cutter won’t cut it.

Then, it was time for the first meeting in the family home—and a surprise for Crystal. Instead of sitting sullen, arms crossed and mute, Danielle spoke up and voiced her opinions. The session got heated, but Adriana was there to keep it under control and on track. In retrospect, Crystal felt the comfort of their own home allowed Danielle to express herself.

Slowly, Crystal realized she played a role in her daughter’s bad behavior. “It was hard, painful, in fact, hearing that what I was doing was wrong. I needed to set limits, stronger rules and learn my triggers and how to control them”.

Despite what seemed like progress, Danielle’s situation went from bad to worse. She was failing classes and wouldn’t graduate with her class. That’s devastating news for a senior in high school. Before MST, Danielle would have spiraled downward at this news. To keep that from happening, mother, daughter and therapist devised a plan around one of Danielle’s problem behaviors: how to improve her actions in school.

And then things changed dramatically.

Danielle set a goal. She wanted to attend college in the fall, which meant making up the three classes she failed and putting in 27 gym hours at the YMCA.

To keep the plan on track, Danielle was rewarded for homework completed on time (money for a college wardrobe) and suffered consequences if she did not. Crystal and Danielle recognized the need to improve their relationship. This meant spending time together—working out, going to church and the movies. They no longer had to be adversaries.

By the end of the summer, Danielle had completed her high-school requirements and enrolled at a nearby community college. Crystal firmly believes her daughter will take full advantage of this fresh start.

“If we didn’t run into MST, I don’t know where we would have been. I had run out of all my options. Now I tell people about MST. It saved our family.”

Crystal is convinced that MST worked because:

And speaking of positive result, Danielle’s case was dismissed because all the court-set goals were met.

To learn more about MST and its long term results with siblings. Download this report.

NY1 | petiteSHOP at The Foundling: A Children’s Charity Pop-Up

Fashion & Style | The petitePARADE Unites With The New York Foundling To...
Scroll to top