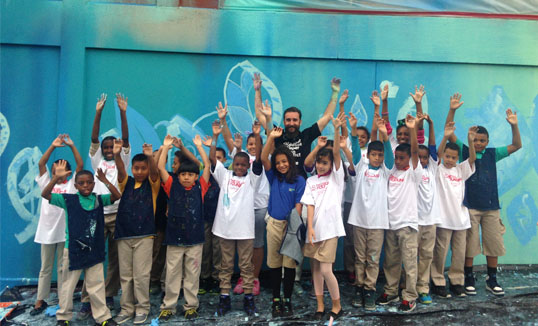 Being creative through mediums such as dancing, singing, and art is important for every child. This month, Haven Academy scholars had the opportunity to express themselves by painting alongside the famous Brazilian street artist, NOVE. Scholars painted leaves at the bottom of a multi-story mural on the exterior of their school, located in The New York Foundling’s Bronx building at 170 Brown Place. Noeli, a fourth grader, was excited to take part in this project, saying, “You get to be creative and use your imagination.”

Scholars took pride in their hard work and the positive impact they had on their community. Haven Academy Principal Jessica Nauiokas told DNAinfo, “This mural is a perfect example of scholars collaborating to give back to the community by creating and sharing something beautiful, unique, and one of a kind.”

Although NOVE has completed murals, paintings and exhibits throughout the world, this was his first visit to the U.S.—and we were grateful he spent much of it with our scholars! NOVE wanted to visit the Bronx because he was inspired by street art in the area and The Foundling and Haven Academy’s mission to serve youth in the child welfare system. NOVE has been featured in publications such as Vogue Brasil, Abstract Graffiti, and Mapa of Arts, and he is currently working on a project for the 2016 Olympic Games.

NOVE partnered with Spoke, a fashion accessories and outerwear brand that cultivates urban art and environmental conservation, to create his first U.S. mural at The Foundling. Spoke collaborates with urban artists and sends them throughout the world to create public artworks. Spoke generously donated all of the costs associated with the mural painted on The Foundling’s building.

The project was a great success for The Foundling, Haven Academy, NOVE, Spoke, and the Mott Haven community, and attracted the attention of local media. News coverage of this event can be found here.