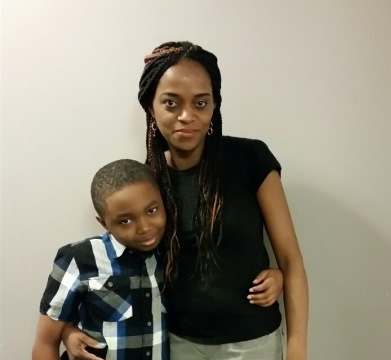 This Mother’s Day we are happy to share an inspiring story of a mother who had the courage and strength to ask for help when times were rough.

As Sancia faced trials and tribulations of her own, she realized the importance of asking for help and keeping her son safe. Sancia demonstrated courage and strength by turning to The Foundling for support as she worked to overcome hardships and obstacles getting in the way of caring for her son.

While receiving treatment, Sancia’s son stayed with his grandmother through Kinship care. Kinship care is similar to regular foster care, but the child is placed with a family member instead of a foster parent. Children placed in kinship care (or ‘kincare’) have the benefit of living with a known and trusted relative instead of an unfamiliar adult in an unfamiliar home. Kincare also promotes family unity and strength.

When Sancia completed rehab, she was eager to mend her family dynamics and work hard to bolster her family’s solidarity.

With help from The Foundling, Sancia received affordable housing through The New York City Housing Authority and her son was able to return home. Sancia has enrolled into community college, became the vice president of her son’s Parent Teacher Association (PTA), and organizes community events including yoga and Zumba.

The Faces of Foster Parents in 2016