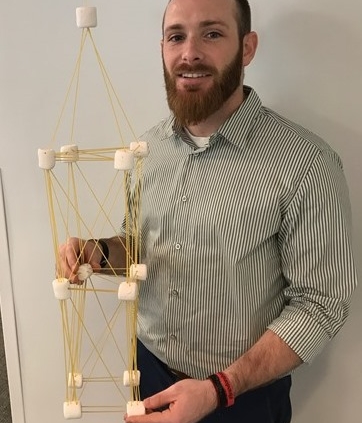 Cory Robbins, MSW, with The Foundling contributed to this blog post

The New York Foundling’s therapeutic teams are consistently working to learn new skills that can help the families and children they serve. And on May 11, 2017, one of the Kids Experiencing Young Success (KEYS) teams participated in one such activity, taking on the challenge of constructing a tower through only verbal communication.

KEYS, one of the many evidence-based therapeutic programs at The Foundling, provides in-home therapeutic services to families whose teens are at risk of falling out of school or being placed out-of-home due to behavioral challenges.

On May 11, one of the KEYS teams met for a quarterly skills training with their consultant from Pittsburgh, and as an ice breaker, they were split into two groups and given the task to make the tallest structure possible using only raw spaghetti and marshmallows. The groups had two minutes to verbally discuss their plans, and then four minutes to execute their plans and build their tower without talking.

The therapists were encouraged to do this activity with their families in session in order to help them strengthen their family’s teamwork and communication skills.

Pictured is Cory Robbins, MSW, Multisystemic Therapy Supervisor with the Bronx Team’s KEYS Program, posing with the winning tower, which the consultant said was “the best she’d ever seen.”