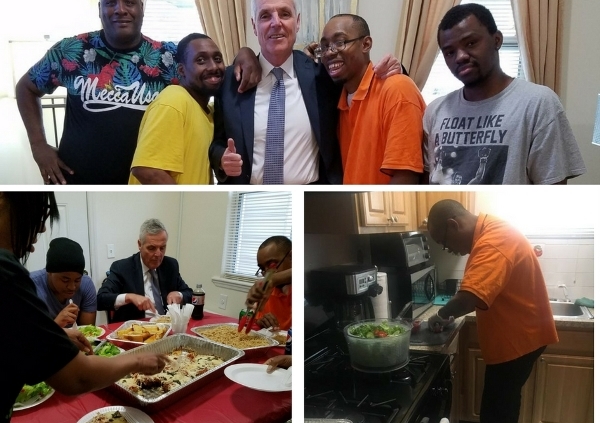 Staff from the Developmental Disabilities Division team contributed to this blog post.

This spring, five individuals in The New York Foundling’s Developmental Disabilities Division program were proud to display their wide range of abilities by making dinner for organization’s CEO and President Bill Baccaglini.

Ruben, Carl, Christian, Draper, and David invited Bill to join them for a delicious meal of chicken parmigiana, pasta and salad in their new supportive independent living apartment, located in the Wakefield section of the Bronx. After planning the menu and shopping, the men prepared the dinner with some assistance from staff.

“It was a great dinner! The food was great and the staff that joined us for dinner were unbelievable — and had such good rapport with the guys,” Bill said of the April 2017 visit.

The residents spent the last several years working very hard to obtain the necessary skills to live in a more independent setting, learning how to cook, how to take their medication, how to travel on their own throughout the community, and much more. They were able to move into their new home, a supportive individualized residential alternative (IRA) residence, in February 2017.

Prior to moving, while visiting The Foundling’s central office in Manhattan, Ruben, one of the residents, told Bill about the future living arrangement. In excitement, he promised Bill a chicken parmigiana dinner once they were settled.

Once ready to host, Bill took Ruben up on his offer.

During the visit, the residents told Bill how much they love having their own bedrooms, and the group bonded over conversation throughout the evening.

To top it off, Bill brought over a cheesecake and chocolate cake for dessert.

“I can’t wait for the next dinner visit,” Bill said. “We are having shrimp!”