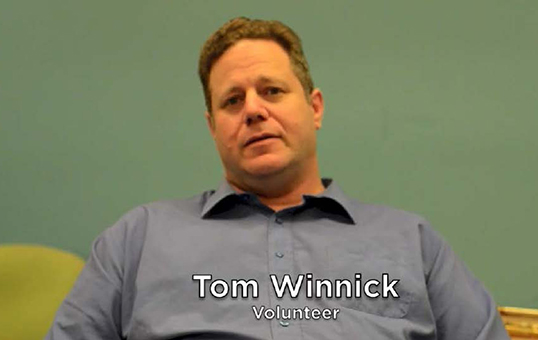 Click here to listen to our young scholars play a short number and hear Tom discuss his experiences on camera!

Thank you  to our guest blogger, Tom Winnick, for this timely piece for Volunteer Appreciation Week 2013. Tom is one of The Foundling’s most dedicated volunteers – he will be awarded our “Volunteer of the Year” award April 25 at the annual Volunteer Appreciation Cocktail Party.  When he’s not teaching music, Tom is studying to get his doctorate in  forensic psychology.

Music has always been an important part of my life. My father was a great lover of jazz music, and he introduced me to it at a young age. My music practice didn’t begin until I was in middle school though. At the time, I was struggling through art classes, and my teacher suggested I try my hand at music instead. Heeding her advice, I enrolled in the brass band to learn the baritone horn. Unlike art, music came naturally to me. I understood music theory and how to read the notes I progressed quickly and continued my study through high school in the jazz and marching bands – my father encouraging me all along. I may have been one of the only 17 year olds around going to Miles Davis concerts, but I loved it.

While music never became my career (I’m currently studying to get my doctoral degree in forensic psychology), it always remained a hobby and a great love of mine. About two years ago, I was presented with an opportunity to share this love with others when a colleague introduced me to The New York Foundling. I was looking for ways to get involved with the community and give back, and some Foundling staff members told me about a wonderful place called Haven Academy—a Foundling sponsored charter school in the South Bronx that serves kids in the child welfare (foster care) system. It was suggested that I could teach music to these youngsters at Haven Academy. The feeling was these children would benefit greatly and that a brass instruments class would fit nicely into Haven’s bustling after school activities while supplementing their existing music program. I was sold.

I began to collect the instruments necessary for the class immediately. I’ve long been a trumpet collector, so I knew where to start. I found instruments on ebay and received donations from friends and contacts in the music industry. Then, a friend in Seattle heard about the project and offered to refurbish all of the instruments at cost. With a full ensemble, brass band lessons kicked off at Haven in the fall of 2011. I’m now there three afternoons a week.

I encourage my students to study music on their own as well as take instruments home to practice. For me, volunteering with and getting to know these kids has been a tremendous experience. I grew up in a middle class household in LA, spent time in the Army, and moved to New York, but nothing prepared me for the perspective of a kid from the South Bronx today. Some of the issues they go through are bigger than anything I’ve ever had to deal with, much less as a kid. Many of them are struggling with things that I never thought could touch a child’s life.

Music is our bridge, and I use music as a means to communicate with my students. They’ve taught me so much that often I feel our roles are reversed. I remember one girl who was dealing with things at home and struggling with emotional and behavioral issues. Many days she would come to my class and just cry to me. I realized that I wasn’t just a music teacher; I was an adult that these kids could trust and talk to.

My hope is that, at least for some of the kids, music is something that they can have for the rest of their lives. Music can be a way to express emotions and to hopefully help these kids cope with some of the issues they have to deal with.

Last summer I had the idea to get one of my best students into a prestigious camp called the Gramercy Brass Band Camp. He was accepted and they granted him a half scholarship. Between me and the school, we covered the rest and got him there. It was a great opportunity for him. For a month leading up to the camp, this young man came to my house to practice and catch up to the children who would be there with him, many of whom had been studying music years longer than he had.  He ended up having a wonderful time and this year, we’re working to send him back, along with one other student who has progressed quickly.

I once had a conversation with the father of one of my students and he was very eager to have her continue her studies. He felt that her practice of music keeps her away from other activities that aren’t good for her or playing video games and watching TV. The students also learn music history and the evolution of music, which is something that I’ve always worked to teach my own kids, like my father taught me. One of my students affectionately calls jazz, “grandpa music.” And in a way he’s right, much of today’s music follows the groundwork laid out by early jazz musicians.

Volunteering at Haven Academy and The New York Foundling, for me, is about making sure the things I’ve learned and the experiences I’ve had, can be passed on to our children, especially children that may not have these opportunities otherwise.

I don’t expect recognition for this, but I get back what I put in many times over.  I might be tired and burned out, but when I walk out of the school after class, it feels like a brand new day.