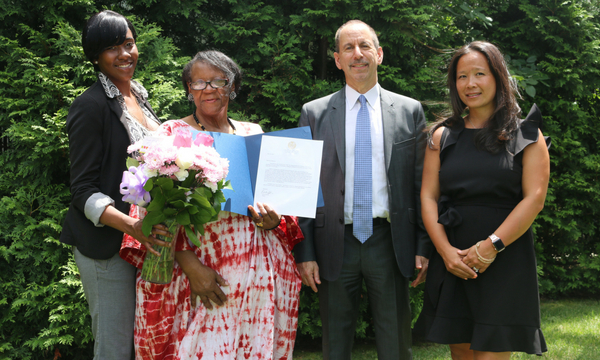 Above (from left): Crystal and her mother Lizzie with Commissioner David Hansell and Liyan Bao, The Foundling’s Vice President of Specialized Services & Permanency Support.

On Tuesday, July 24, 2018, Commissioner David Hansell of New York City’s Administration for Children’s Services presented Lizzie Burrow, one of The New York Foundling’s longtime foster parents in Staten Island, with a special letter of recognition from Mayor Bill de Blasio’s office. The letter was an official thank-you from the City of New York her for her 30-plus years of being a foster parent and for opening her home to children in need of love and support.

The recognition from the city was part of City Hall in Your Borough’s week-long visit to Staten Island.

Crystal says she is so inspired by the example set by her “nana” (as she affectionately calls Lizzie) that she hopes to one day be a foster parent, too.

Earlier in July, Lizzie, who is 76 years old, officially adopted Crystal Smith, who had been living in her home as her foster child for nearly a decade. The two had a special bond from day one, and Crystal credits Lizzie for changing her life. Several news outlets, including the Staten Island Advance, Fox 5, and ABC7, shared their adoption story.

Watch Lizzie and Crystal’s interview with the Administration of Children’s Services:

3 Ways to Honor National Parents’ Day with Your Family