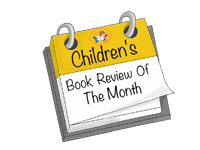 This book review was given childrensbookstore.com’s “Book Review of the Month Award. Big thank you to the blog writer, Celia McGee, who contributes all of The Foundling book reviews.

A little green duck has lost his new blue socks, and he is very sad. Eve Bunting recounts his quest in lilting rhyme. He looks everywhere at home, but then remembers that friends are the ones to call on in trouble. He enlists such animal buddies as Mr. Fox (we notice, he’s a reader), Mr.Ox (a painter), and the Peacocks, a family of color-conscious birds if there ever was one. Each has their own ideas, but this book teaches that only if you really look and also put two and two together about your own habits and personality traits that you will you find the right answer. Sometimes what’s lost is hiding in plain sight, other times not quite so much. Small children will get a kick out of this goofy tale and may soon be reciting or reading it on their own.

Toys in Space, by Mini Grey (Alfred A. Knopf)

What could be scarier for a group of beloved toys than to be left outside overnight? At least they have each other—which is more than be said for the careless little boy who forgot them there. Each with their own personality and distinctive voice, they express their fears. Yet in that same place, the Wonder Doll, the stuffed rabbit, the play robot, the cuddly wool rabbit, the toy dinosaur, and the tiny cowboy and his horse see something they’ve never seen before: the dark night sky with its fireworks display of stars and planets. And Wonder Doll tells them a story to get them through the night. It involves an alien spacecraft that swoops down to earth and beams them up into the lonely, anxious life of a creature they name the Hoctopize. He’s lonely even though he has a room where keeps all the lost toys collected from gardens on earth. The merry band of visiting toys soon takes care of that (parachutes help). But this still does the Hocotopize no good because he’s lost  his own very special toy, his Cuddles. The toys try to console him, but must return to earth before Dawn. Where is Cuddles? “It will be in the last place” the Hoctopize “looks. Things always are.” Can you guess?

The Sasquatch Escape, The Imaginary Veterinary: Book I, by Suzanne Selfors (Little, Brown)

Condemned to spend the summer with his grandfather in the boring burg of Buttonville while his parents “work things out” back in glamorous L.A., Ben Silverstein isn’t just unhappy, he’s mad. Making things worse is the strange local girl Pearl Petal, who works at the 99 Cent store of this once thriving center of button-making and has a reputation as “a bit of a troublemaker.” But they bond over a strange shape they see fly by one night—a bird, a plane, Superman? A dragon. But what is an imaginary creature doing in their all-too-real world, let alone Buttonville? These questions lead them to the abandoned Buttonville Factory, which is no longer as empty as it seems. Secretly taken over by a Dr. Woo, they discover she’s a veterinarian to every sick or wounded imaginary creature ever…imagined, briefly allowing the suffering ones into the Real World for her medical ministrations. But then a Sasquatch escapes and gets up to some very furry mischief. Can Ben and Pearl re-capture him? After all, it was Ben’s fault the giant big foot is on the lam. It turns out there is more than one way to catch a Sasquatch, and many ways to transform a dull summer into a blast. And if you end up the apprentice to a magician, what’s not to like? Summer is only three months long, but a lot of growth can happen.

A lot of kids dread school talent shows, and make fun of them. Not fifth-grader Donny Darko, unfortunately dubbed Dorko by the cooler, stronger kids in school. He wants to show off the magic skills he has practiced since he was a little kid, and maybe win the attention of a girl he’s developing a crush on. Despite many setbacks, Donny has a great sense of humor and a sharp wit that will have his readers cracking up, even as his life is falling apart. His father’s new job has him constantly away from home, his mother is over-worked, his younger brother is a practiced pest. But what truly spells disaster is when their obnoxious and dour Grandma Melvyn—actually some kind of crotchety distant relative– moves into the already crowded, strained household to await an operation. Will Donny prevail, learn his lessons, and survive the humiliation of flopping on TV quiz show in front of the entire town? The least likely person in his constellation proves his guide. But up on stage he’s all alone. Or is he?

Far, Far Away, by Tom McNeal (Alfred A. Knopf)

High-schoolers and their parents may at first scoff at the thought of a book suffused with the fairy tales of the Brothers Grimm. Watch out. Award-winning Tom McNeal’s Far, Far Away will soon weave its enchantments around readers almost as strongly as frightening mysteries, tragic disappearances, ancient puzzles, and magical book-learning impose themselves on the citizens of the village of Never Better. Fans of A.S. Byatt will appreciate the almost invisible scholarly touch that applies the history of the famous fairy tales—violent and scary, psychologically prescient and almost unbearably gory—to the lonely life of young Jeremy Jeremy Johnson. Then along comes Ginger, the brave, smart girl he initially fears but comes to love. As sadly often happens in our own world, Jeremy’s mother has left his father and sent him into a housebound depression. Young children keep disappearing. Kindly individuals may not be who they seem. Yet there’s also a pivotal ghost whose identity is key to the plot—and indeed tells the story. Keep guessing. Ultimately a tale of love, self-discovery and liberation, this novel sparkles with the remarkable made real.

What Camp Felix Means to Me

“I know Camp Felix is a big part of who we are.”
Scroll to top