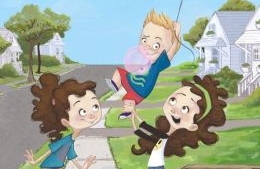 Many thanks to Foundling friend Celia McGee for her expert reviews!

What Floats in a Moat, by Lynne Berry, illustrated by Matthew Cordell (Simon & Schuster Books for Young Readers)

The wily intention of this hilarious book is to convey the how’s and why’s of Archimedes’ law–the apparent loss in weight of an object immersed in a fluid being equal to the weight of the displaced fluid—but that will be just one takeaway for young readers. The misapprehensions and mishaps of Archie the Goat (in a knight’s helmet) and Skinny the Hen as they attempt to cross a moat–to a most impressive-looking castle–using an increasingly adaptable barrel contraption are both highly entertaining and an education. The dipsy-doodle illustrations concocted by Matthew Cordell give the book a lot of its loopy charm. The apt twist provided by the impatient Queen awaiting her buttermilk delivery on the other side will sneak in some practicality amidst readers’ cheers.

The Quirks: Welcome to Normal, by Erin Soderberg, illustrated by Kelly Light. (Bloomsbury)

Every kid wants to have magic powers, right? Don’t be so sure. The Quirk family—sweet-tempered, hard-working Mom, a single mother and waitress, specializes in mind control, her father, Gramps, can move around time, fourth grader Penelope has a wild, transformative imagination, and little, impish Finn is invisible to everyone but Molly, Penelope’s twin. She’s the only one who doesn’t have magic skills—or so she thinks. The Quirks’ magic keeps getting them in trouble, and pegs them as different, as outsiders. As this eccentric bunch move from town to town, never quite fitting in, and so on to the next, Molly tries to clean up their messes and make them seem normal. But when they land in the actual town of Normal, hopes and chances pile up that they may be able to stay. For even Normal has its whacky side, and the Quirks help bring that out even as the town is charmed into accepting them.  Much revolves around an unusual yearly competition ironically called Normal Night. The book ends abruptly and on a comical note of suspense—promising a sequel.

Hero on a Bicycle, by Shirley Hughes. (Candlewick Press)

Heroism takes many forms, a significant number of which are called on in this story of Nazi-occupied Florence toward the end of World War II. Riding hither and yon on his beloved bicycle is the young teenager Paolo, scrounging food for his family, who live in the countryside, keeping an eye on developments in the city, and wondering, as do his mother and sister, when his father, who has joined the guerilla Partisans fighting the Germans will ever come home.  Sister Constanza illustrates how difficult it is, especially under these circumstances, to come of age as a pretty, romantic young woman, while mother Rosemary must walk the tightrope of an Englishwoman married into Florentine society. Hughes shows the reality of Nazi-sympathizers and supporters of the resistance living side by side, and the ruthlessness of the Gestapo in some ways matched by the Partisans’. Paolo must command quick thinking and physical endurance—and keep a deadly discretion about a secret hidden in his home. Can his bravery—and his bike—save the day? The answer comes along with the Allied troops triumphantly closing in on Florence.

A Midsummer Night’s Scream, by R.L. Stine. (Feiwel and Friends)

Call this R.L. Stine’s “Beverly Hills 90210”—with a healthy number of the characters more sympathetic, and, of course, remarkable amounts of horror and gore thrown in.  Claire Woodlawn’s parents, partners in a movie studio with another couple—inconveniently, Claire is in love with their son–have decided to shoot a remake of “Mayhem Manor,” a 1960s horror movie so haunted by real-life, gruesome deaths that production was shut down. Stine cleverly weaves the mounting terror that starts to haunt the new production with the glamorous, sometimes superficial lives of a group of privileged teenagersin southern California who–crushes, lip-gloss, Hollywood aspirations and all–also get cast in the movie. Can Stine make the events surrounding the new production even scarier than the first? Will the leading lady, a former child star, keep it together? Let’s just say that you’ll never look at a microwave oven in quite the same way again. Bounding mysteriously through the set of the film’s murder-prone mansion is an evil figure named Puckerman—Stine’s Shakespeare references are another gotcha element—a dangerous ally to anyone who trusts him. Stine is skillful at sketching in characters quickly and following through on their personalities with their actions, including the teen romance element as well as our realization that Claire’s parents may not be as perfect as they seem. Hollywood takes its toll, not the least on morality, and on young celebrities who have peaked too soon to sustain happiness into the future.

Grownups and Ages 16 and up

Shocked: My Mother, Schiaparelli and Me (Alfred A. Knopf)

Readers ate up Patricia Volk’s family memoir Stuffed, about the history and progress of the well-known Garment District restaurant clan she grew up in in New York.  With Shocked she returns with a rich sliver of that—her relationship with Audrey, her beautiful, perfectionist, temperamental clotheshorse of a mother, and how, when Patricia was ten, a book gave her a perspective on that bond. It was the autobiography of the celebrated designer and surrealist daredevil Elsa Schiaparelli, which revealed to the curious, intellectual and properly brought up Volk daughter that there was another way to be in the world. Slowly but surely liberated to become an artist—Volk is an acclaimed and prize-winning author of fiction and nonfiction—she always stayed close to her mother, and draws a sensitive portrait of her over the years. Bursting with the elegance, fun and limitations of Jewish upper-middle-class life in New York from the 50s onwards, this book fits its subject like one of Audrey’s hand-stitched gloves.

When learning to throw a frisbee means more than just that