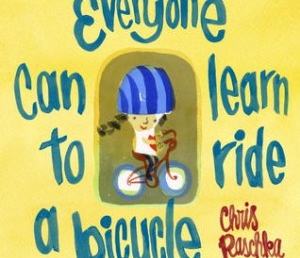 Everyone Can Learn to Ride a Bicycle, by Chris Raschka

Summertime and bike-riding go together. But first you have to know how. From a series of tender, funny and illuminating lessons between a patient and encouraging father and his increasingly determined little daughter, two-time Caldecott Medal winner Chris Raschka weaves a story of not giving up, and its rewards. With illustrations that make you want to hop right up on the saddle, Raschka takes his young subject from learning to choose for herself when it comes to selecting her bicycle to not letting any obstacle—her initially shaky sense of balance, pushy grass, sudden hills, the requisite number of spills—get in the way of her acquiring one of life’s most exciting skills. She learns independence through trusting her father, and bonds with him by making him proud.

Skip a bunch of time zones and you land in Hawaii, a place that mixes cultures almost as saucily as New York. Throw in a bit of Hollywood—a director of zombie films has chosen fourth-grader Calvin Coconut’s beachside Kailua neighborhood near Honolulu to shoot part of his latest picture. You can just taste the sweet humor and unlikely predicaments of this installment in the Calvin Coconut series. Zipping around on his bike, while “High above, the sun was an egg yolk sizzling in the big old Hawaiian-sky frying pan,” Calvin helps the director’s slightly weird nephew, a former classmate, round up friends, neighbors and some others hiding big surprises for this venture. With stardom, no matter how minor, comes responsibility, true acting isn’t just playing around, wearing zombie makeup is only the beginning of character building, and, as with a film crew, the idea of family can be fluid and inclusive.

Some of the greatest classics read by young people have turned the world upside-down, inside-out, or cast adrift on raft somewhere between make-believe and the Mississippi River. With Undertown , Melvin Jules Bukiet, who until now has written, brilliantly, for adults, tries his hand at a very contemporary topsy-turvy tale for a younger readership. Two teenagers, Timothy Murphy and Jessamyn Hazard, meet very un-cute when their loving parents, both widowed, start to date. Timothy is the captain of this tale, which starts out innocently enough when he and his dad, close nautical buddies, buy a vintage wooden sailboat. But Jessamyn—tall, gawky and the smartest kid in Montclair, NJ–learns to be second in command when the boat slips off its carrier on a drive through Washington Heights and into a deep construction pit, taking Timothy and Jessamyn with it. Soon afloat somewhere in the 6000 labyrinthine miles of Manhattan’s 19th-century storm sewers, they experience an astonishing adventure in a netherworld full of good, evil, criminal transport stations the size of Grand Central, trained rats, a self-taught graffiti genius, a cruel tyrant in a tiara, and enough local history lessons to fill the Boat Pond in Central Park.

The Circus and Other Stories, Four Books by Samuil Marshak and Vladimir Lebedev (Tate Publishing)

The 1920s were a Golden Age of Russian children’s books and literature, not only coinciding with the flowering of Constructivist art but also a strong interest in the child. With the reissue of four irresistible tales by two famous collaborators—the poet Samuil Marshak and the artist Vladimir Lebedev—modern art and poetry meet Russian folk graphics and children’s fantasies to produce a fun-filled treasure trove. In “The Circus,” the big top comes to town with all its marvels. An interplay of typefaces and graphic styles produce an appealing story about contrasts between old and new in “Yesterday and Today.” A passion for ice cream, in “Ice Cream,” turns into a gastronomic fable. And “How the Plane Made a Plane” abolishes any thoughts that the act of crafting a new carpentry tool is the least bit boring. Like this re-release, it highlights the pleasures of renewal instead.

Dance of Shadows, by Yelena Black

A school dining hall “with a massive salad bar in the center” and students fueled by Red Bull and Diet Coke are just two telling indications that this supernatural thriller takes place in the world of ballet. Specifically at the elite New York Ballet Academy, where 15-year-old Vanessa Adler comes to pursue her great gift, but equally try to find her older sister, who disappeared from the academy under mysterious circumstances three years before. Before she knows it, Vanessa is in love with a handsome yet vaguely sinister senior, picking up clues about her sister and other vanished ballerinas, and, despite competition from many older and more highly trained bun heads, she is cast by NYBA’s often cruelly demanding ballet master, Josef, as the lead in Stravinsky’s “The Firebird.” The reasons for his decision become another mystery to unravel, as the story takes a turn into black magic, demonic possession and the occult. A definite plus: it leaves wide open the possibility of a sequel.

Foundling Ed Specialist’s Philosophy Has Roots In Her Own Foster Care...