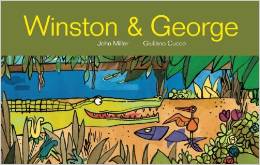 Never forget that particular books come with stories of their own.  So it is with Winston & George. Half a century ago in Rome, the American writer John Miller and his friend, the Italian artist Giulano Cucco, produced four children’s books together. But when Miller presented the books to American publishers—this was in the early 60s—they told him the cost of reproducing the full-color illustrations was prohibitive. Miller eventually stored away the stunning artworks in the attic of hi country house, until he came upon them years later and was able to reconstruct the stories that went with them, though learning sadly that Cucco had died.

Winston & George, the first in a series of these collaborations now being published by Enchanted Lion Press, is a cautionary tale of friendship when one friend courts peril by taking advantage of the other. With distant echoes of “The Boy Who Cried Wolf,” up pop friends and fishing cronies Winston, the tolerant crocodile, and George, a crocodile bird with a few too many practical jokes in his arsenal. Like the time he yells “Danger!” flying over Winston and his fellow crocodiles napping happily in the sun, sending them plunging into the bright blue water of the chilly river. Their re-surfacing comes with a warning: “’A crocodile bird that plays pranks deserves to be eaten up, ‘” growls the oldest, most cantankerous of the reptiles.

But it takes the young and restless and not yet morally conscious often longer than it should to learn their lessons. Persisting in his trickery, George finally puts Winston in mortal danger, earning the wrath of the entire neighborhood’s hippos and crocodiles, and forced to acknowledge the possibility that he has killed his friend. Thanks to a miraculous and communal effort, Winston barely pulls through. The same cannot be assumed of George when a verdict is reached to put him on the death row of a crocodile’s teeth. There is only one surprising way out, dependent on true friendship and even truer change.

Oliver and the Seawigs

Lots of children have had the experience:  your parents’ professions mean your family moves a lot, but when they finally decide to settle down, you’re rather relieved and actually pretty excited to have a place to call home.

Ten-year-old Oliver Crisp is a very extreme case in point. His parents are explorers, and they have been everywhere—love at first sight atop Mount Everest, wedding ceremony at the Lost Temple of Amon Hotep, and, with Oliver in tow, pushing through to the deepest parts of the densest jungles, where, in one of Sarah McIntyre’s rambunctious illustrations, Oliver has to do his reading hanging upside down from the branch of a tree sporting exotic flowers, slithering snakes, and a far-too-interested-looking crocodile below.

For a boy like this, imagination can run wild at the thought of domestic calm and a life full of BFF schoolmates, especially when the Crisps’ explorer mobile pulls up in front of a rambling yellow house firmly settled in the seaside town of St. Porrocks. But, in a matter of perspective (for Oliver’s: see above), what catches his parents’ eyes are a group of small islands, “’Unmapped!’” “’Uncharted!’” “’Unexplored!” that have apparently popped up in Deepwater Bay. Off they go to investigate, but when Oliver wakes up the next morning, both the islands and his parents have disappeared.

Filial duty and unconditional love are not easily suppressed, and Oliver doesn’t. Off he goes in search of his parents, only to find that the Rambling Islands are merely the tips of peripatetic if compact land masses that are all headed to the Hallowed Shallows for a momentous ritual, the Night of the Seawigs. Just like certain beauty pageants—or Wigstock in Thompson Square Park in New York City—the island with the most elaborate headgear wins. Oliver and the friends he has made along the way—a talkative Wandering Albatross addressed as Mr. Culpepper, a near-sighted mermaid named Iris, and Cliff, the island itself, are confident of first place since they have braved the denigrating Sarcastic Sea, valiantly diving for, retrieving, and topping Cliff’s contest headdress with the long-lost wreck of the gold-bearing Water Mole.  An unanticipated factor, though, is the mean, deceitful island of Thurlstone, ruled by a cruel lad embarrassingly named Stacey de Lacey, who turns out to be holding the senior Crisps captive to boot. Oliver must call on inner resources he never knew he had—and a peacock feather—to do battle with the enemy.

May the best boy win, and the most steadfast island, too.

It’s a transformation chronicle told many a time: how the Western newspaperman and Mississippi riverboat pilot Samuel Clemens became the famed author Mark Twain, and his characters Tom Sawyer and Huckleberry Finn entered the canon. But how Clemens and Twain morphed into 21st-century, first-time Colorado novelist Julia Lawson is a whole different story.

With The Actual & Truthful Adventures of Becky Thatcher, Lawson provides an ingenious tale purporting to reveal Twain’s characters for who they really were. And also to put not a few in their places: as minor and often measly participants in a rough-and tumble, mischievous, and death-defying tale centered on Miss Becky Thatcher.

Scrap the “Miss.” Lawson’s Becky is a troublemaker, a truant, a tree-climbing scamp, a witch-watcher, a canny gambler, a true friend to the lonely and outcast, a true enemy to a wussy Tom Sawyer. An unreconstructed tomboy, she prefers her dead brother’s overalls to dresses (“fishskins,”), and boys’ company to girls’, except for Amy Lawrence–smart, pretty, and snubbed mercilessly because her father is the town drunk. With a nod to the idea that this novel is really a story about stories, Mr. Clemens is staying with the Sawyers while his riverboat undergoes repairs.

This is a funny, sunny book in which death, abandonment and intractable grieving nonetheless play their Victorian roles to the hilt. St. Petersburg, a provincial town hugging the banks of the Mississippi, is “as boring as a bible lesson” to Becky on first, gruff impression when she moves there with her mother and her father, appointed the town’s new judge. But the re-location is also an attempt to escape the memory of Becky’s charming rogue of an older brother, Jon, and his mysterious demise. The devastated Mrs. Thatcher barely leaves her room, and Becky believes she’s no longer loved. Whether or not she knows it, she’s trying to become Jon. Numerous St. Petersburg families have lost or been left by fathers, and the mortal presence of disease or violence is never far from this edge of the frontier. Hardly heavy-handed, and a good mimic of Mark Twain, Lawson writes with the emotional insight of our later era.

Comical the novel is as well, what with Becky’s pranks, back talk, descriptions of her slimy teacher and the town folk’s various pretensions, not to mention the bungling pair of murderous grave robbers, the Pritchard Brothers. In this topsy-turvy Twain’s World, Tom Sawyer is a goody-goody, a snitch, and a sycophant, his most dangerous weapon his cowlick, which Becky fears may poke her in the eye.

It’s important to remember that, in the novel Twain devoted to him, Tom was the narrator. What if, Lawson intimates, his was just a bunch of bravado hokum? She admits in a note that she intended Becky’s as an “origin story” for Twain before his more iconic characters were but a twinkle in his eye. Becky talks a lot with Mr. Clemens about her brother. His nickname, she tells him, was “Huckleberry.”

Call Me By My Name

In 1965, in slumbering Louisiana, heroes are tall and young, star at football , and are white. Rodney Boulet and his buddies haven’t yet reached their full stature but are training hard. One day, a “splash of sunlight fell from the trees,” Rodney remembers, as a lone figure suddenly materializes like some fleet-running apparition of powerful promise. The assembled rookies could be cut some slack for thinking that here was a godsend bearing inklings of glories to come.

But  “That’s a full-blown colored if I ever saw one,” one of the boys yells, and they attack him, chasing him away.  “They don’t let Negroes in here,” Rodney explains as, surprising himself, he walks the boy home. “My name is Tater Henry,” the stranger says. “Rodney Boulet, I answered.” And, against all odds, they become fast friends.

In Call Me By My Name, John Ed Bradley (Tupelo Nights, It Never Rains in Tiger Stadium), calls the plays on Deep South race relations, generational conflicts, sacrificial romance, the rush of football and its overblown rewards, the making of heroes and of myths, the slow changes in American society, the ruinous ways fate has of snuffing out the lights. His novel hits the high points and low points of a perilous sport, the mania it arouses, and the conflicted lives slipped in between.

Vietnam. Flower power. Black power. The assassination of Dr. King. Tater’s reluctant welcome into Rodney’s all-white high school team doesn’t occur until that chapter in American history is underway, five years after their first ugly encounter. Time after time, he leads a formerly mediocre team to victory, and the state championship looms. Coach takes the unprecedented step of anointing Tater quarterback, and once Tater and Rodney are recruited for the legendary–and legendarily segregated–LSU team, there emerges from Bradley’s toughly sensitive story talk of “the first black superstar.”

The words and attitudes expressed by the locals on another topic—the passionate relationship and abiding love between Tater and Rodney’s twin sister, Angie—hits the novel’s harshest notes of virulent bigotry and dual tragedy (notes that, more muted, remain today). Rodney startles himself with his conflicted feelings, and we are spectators to how Pops, his once thoroughly racist father, tries to explain those twisted emotions to him. In a town where straight allees of trees lead to clustered houses where plantation mansions once stood, the immutabilities of an ostensibly commonplace America strike home. That prevents the community a homerun. But Bradley’s novel hits the bases.

Healthy Back to School Lunches