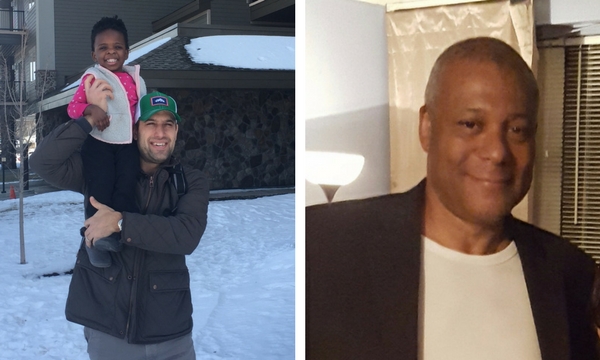 Above: Jared with his daughter, Maya (left). On the right, a photo of foster dad Daryn.

Father’s Day is for celebrating fatherhood in all its forms.

This year we’re spotlighting two dads who have beautiful parenting stories. Meet Jared, a new dad to daughter Maya, who he and his wife adopted through The Foundling, and Daryn, a dad who has opened his home to numerous foster teens.

It was right before Christmas when Jared and his wife Chrissy found out they would be adopting Maya, an energetic 2 ½ year old who had been living with foster parents since birth. Jared couldn’t wait—he knew adopting a child was important to his wife, and they had only recently completed their training and certification through The Foundling.

“It happened really fast and we had to quickly prepare for Maya’s arrival,” Jared explained.

In a matter of days, Jared spent time getting to know Maya, pick out children’s furniture and go shopping—on his list: a high-chair and stroller, clothing, toys, and all the other essentials you need to take care of a toddler.

Over the past seven months, Jared has taken Maya skiing and golfing—and looks forward to introducing her to other hobbies and sports.

“Jared will do anything to make Maya laugh,” Chrissy shared when asked what Jared is like a father.

Maya’s adoption was finalized in May—coincidentally on the same day as The Foundling’s Blue Party, an event hosted by The Junior Board, a committee of which Jared and Chrissy are proud members.

There were a few things that lead Daryn, 57, to become a foster parent.

The single dad of two had taken a parenting class, started his own parenting group, and had gone to school to study human services. It was after an internship in a high school working with troubled kids, and hearing stories through the parenting group, that he realized the great need for foster parents — especially for male teens.

He also noticed that when his son was a teen, some of his friends had gone down a dangerous road, which only solidified his drive to step up. He says he noticed, “A lot of them … they don’t know how to become a young man. Nobody is showing them, nobody is teaching them how to be men.”

Through fostering, he says he figured, “I could give them my experiences and what I’ve learned and try to push them in that right direction so they could be responsible.”

Over the past 7 years, Daryn has had about 25 foster teens come through his home. He is currently fostering one teen, a 17-year-old.

Many of the teens who have been in and out of his home have faced many obstacles.

“A lot of male teens who have been in foster care … they’ve been in and out of different homes,” he says. Each home comes with its own set of issues, rules and adjustments. “That just piles into their lives.”

Some of the things Daryn aims to instill in these teens are structure, consistency, and positivity. “They have to understand that there is some hope at the end of this road here.”

And although he has raised his two biological children, who are now 27 and 30, and has been a foster parent to about two dozen teens, he says he’s constantly learning something new about parenting. “I learned how to open my mind more,” he says. Plus, he jokes, it keeps him young.

Daryn says the most rewarding aspect of being a foster parent is when you see them succeeding in the future, and when the teens come back to share their successes.

But it’s the overall experience of fostering teens that Daryn finds truly fulfilling.

“The foster parent and parenting thing just comes naturally to me,” Daryn says. “It feels like what I was meant to do.”

Learn more about fostering a child with The Foundling through our Foster Care page.