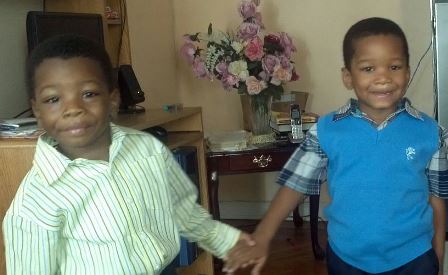 The New York Foundling has a long history of placing New York City children into safe, loving and supportive homes. Depending on a child’s unique circumstance, they may be placed into a foster home (this is temporary) or an adoptive home (this is permanent).

As we enter National Adoption Month—held annually each November—we want to take this time to raise awareness on the pressing need to recruit adults who have the ability to open up their heart and home to children in need.

Today we are proud to place a spotlight on Gillian and Orlando, a Brooklyn-based couple who opened up their home to a set of twins in 2010 when they were 3 years old. Below is their story.

Gillian and her husband Orlando adopted twin boys in May 2016 after fostering them for nearly six years.

In January 2011, Gillian and Orlando learned that the twins were no longer able to stay with a relative who was watching over them at the time, and the biological mother was unable to care for the kids on her own.

The twins were reunited with Gillian and Orlando within days and have been with them ever since. Now 9 years old and in 4th grade, the boys have taken on many characteristics of their adopted father—they have his mannerisms, style, and even walk like him!

“From the time they came into our lives, we were mommy and daddy. That has never changed,” said Gillian in a phone interview.

To celebrate the adoption, Gillian and Orlando took the boys on a cruise this past summer and everyone had a terrific time!

Click here to learn more about The Foundling’s work placing kids into save and loving homes.