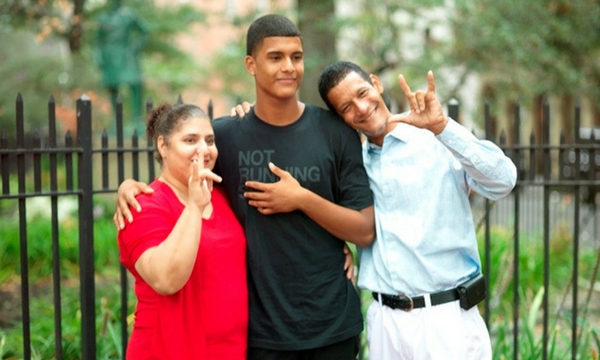 The Foundling’s Deaf Services Department contributed to this post

September marks Deaf Awareness Month, and from September 18-24, all around the world, we celebrate and acknowledge International Week of the Deaf.

At The New York Foundling, we have a Deaf Services department. The staff on this team, many of whom are Deaf or hard of hearing themselves, work with families in the community who are referred by the Administration for Children’s Services for preventative services. The Foundling is the only preventive agency contracting with ACS serving the Deaf community.

Below, one of our interpreters, shares some interesting facts about the Deaf and hard of hearing community that you may not have known.

1. Sign Language is widely used. Approximately 70 million deaf people use sign language as their first language, according to the World Federation of the Deaf. Sign Language gives the Deaf community a sense of belonging, community, and identity.

3. American Sign Language is not a “signed version of English”. It is its own unique language, with different structure, grammar and syntax than English.

4. A child of a Deaf adult is given a special term in the Deaf community. They’re called Child of Deaf Adult (CODA). A CODA’s first language is often ASL, or another signed language, rather than English or spoken language.

5. It is believed ASL derived from France. According to the National Institute on Deafness and Other Communication Disorders, it may have derived from LSF, or Langue des Signes Française. France is where the first school for the deaf was founded in 1760s.

6. In the 1920s, Gallaudet University’s football team used to “huddle” to discuss next play. The university for the Deaf and hard of hearing did this so the other team could not see their signed communications — a practice still used by football teams everywhere today.